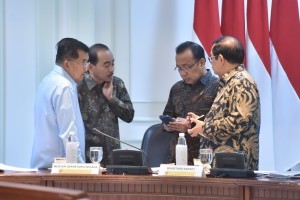 Vice President Jusuf Kalla and a number of Ministers before a Limited Meeting at the Presidential Office, Jakarta (2/10). (Photo by: Jay/Oublic Relations Division)

“I want this event can put Indonesia in the global spotlight, be it by showcasing our economy, our leading products in the global market, our country as an investment destination, and our attractive tourist destinations,” the President said in his introductory remarks at a limited meeting on the preparation for the meeting, at the Presidential Office, Jakarta, Tuesday (2/10).

According to the President, the Government also hopes to capitalize on the presence of around 18,000 participants, including 3,500 delegates from 189 member countries to bring positive economic impacts, not only for Bali, but also other regions in the country. The President also ordered his Cabinet to make thorough preparation on the ground for the success of the event, which is also expected to bring positive impacts for Indonesia.

For the record, the 2018 International Monetary Fund (IMF)-World Bank Annual Meeting – to be held in Nusa Dua, Bali from 8-14 October – will be attended by a number of world leaders, economic ministers,  central bank governors, as well as businessmen, investors, and leaders from relevant institutions who became economic stakeholders in many countries. (MAY/RSF/ EN/JAY/OJI/ES) (MUR/EP/YM/Naster).