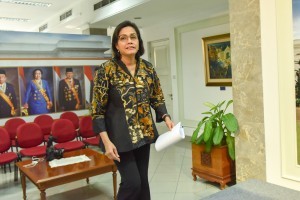 Minister of Finance asserted that more than 23,000 guests are expected to attend the 2018 International Monetary Fund (IMF)-World Bank Group (WBG) Annual Meetings to be held in Bali, on 8-14 October 2018. Therefore, the Minister is optimistic the event to bring positive economic impacts, not only for Bali, but also the whole country.

We hope the presence of more than 23,000 guests who stay here can increase the economy in Bali and other tourism destination areas, Sri Mulyani told reporters after a limited meeting at the Presidential Office, Jakarta, on Tuesday (2/10).

So far, preparation in term of logistics for the organization of the Annual Meetings is almost completed. Preparation for hotels to host 23,000 guests is almost done, while the venues and other facilities are expected to be ready to be used immediately.

Regarding earthquake that hit Lombok, Sumbawa, Palu, and Donggala, the Minister hopes the management of such disaster will be discussed in the Annual Meetings that will bring benefits not only to Indonesia but also other countries facing similar situation as Indonesia.

For that reason, issues on disaster risk management will be discussed in the Meetings such as budget initiatives, coordination among countries, international support, including dissemination of insurance as an instrument, Sri added.

According to the Minister, the Annual Meetings is slated to discuss topics that are considered to be the core of the event. There will be also side events that are organized by several institutions, among others forums of parliament, CSO, NGO and CSR that will be held from 7 to 9 October 2018.

In addition, civil society forums discussing several issues that become the concerns of the CSO will also take place on 8-10 October.

The Minister added that the Government will do some preparation in order to increase topics that considered important not only for Indonesia but also for the world given the Annual Meetings is held when global economy is still fluctuating which increases risks for many countries.

Thus, discussion among policy makers on the development of global economy including the U.S. monetary policy normalization, trade war, and several issues on climate change technology will also become topics of discussion during the Annual Meetings.

Indonesia will indeed be a participant and also the host, the Minister said.

On of the highlights of the event is ASEAN Leaders Gathering to be held on 11 October.

The gathering is a token of solidarity among ASEAN leaders and an occasion to discuss the latest situations in  ASEAN and the world, the Minister concluded.  (MAY/RSF/JAY/ES) (RAS/MMB/Naster)