In 2015, Government to Focus on Infrastructure Development 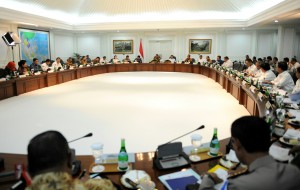 In 2015, Government to Focus on Infrastructure Development

Some people gave me advices regarding additions to the arrangement of the draft of 2015 Revision State Budget, but all I wanted is in 2015 our focus will be on infrastructure, President Jokowi said it in his opening speech before the plenary cabinet meeting in the Presidential Office, Jakarta, on Wednesday afternoon.

The plenary cabinet meeting discussed about the policy direction of the arrangement of 2015 Revision State Budget was attended by all Ministers of Work Cabinet.

Besides the infrastructure development, according to the President, the government will be focus on the food activities, which means the Agricultural Ministry will take the bigger part.

Our temporary focus is on the both things, Jokowi uttered.

After that, in the next year, there will be next focuses. It means that from the budget of the recent fiscal room, we have the ability to build but what we do now should be something that is productive, Jokowi explained.

The plenary cabinet meeting was the third meeting led by President Jokowi during this Wednesday. Earlier, after visiting the office of Nahdlatul Ulama Executive Council and Muhammadiayah Central Council in the morning, President Jokowo accompanied by Vice President Jusuf Kalla had led the specific cabinet meeting regarding the drug abusing, preparation and security for the Christmas Day and the New Year, then it was continued with the economic cabinet meeting about the scheme of subsidized fuel price. (Humas Setkab/ES)