In 2017, Disparity Should be Reduced: President Jokowi 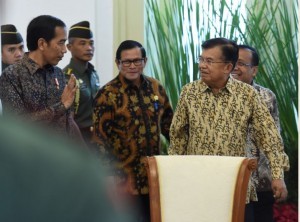 In 2016, Indonesia was appreciated for its success to maintain the momentum of economic growth amidst global economic slow down. In 2017, President Joko Jokowi Widodo explained that the Government will focus on creating equity.Although we know our gini ratio is slightly better, the overall rate is still quite high. Therefore, we must work hard to decrease our disparity rate, either disparity between regions or between the underprivileged people and the rich. This is the major issue for the Government, the President said when delivering an introductory remarks at a Plenary Cabinet Meeting, at Bogor Presidential Palace, West Java, on Wednesday (4/1) morning.

To reduce the disparity, according to the President, this year as well as next year, assets redistribution and land legalization policies are very important because the Government wants the people to have access to the land.

Thus, President Jokowi asked all to focus on the matters related with concession of costumary land and land certificates for the people. There should be major changes in two years. I think I have told Minister of Agrarian and Spatial Planning/Head of National Land Agency as well as Minister of Environment and Forestry to start assets redistribution as well as reform at the end of 2016. In 2017, this work should be continued, the President said.

Regarding equity issue, the President asked to add more programs to facilitate the peoples access to get capital. This year as well as next year, according to the President, Smallholder Business Credit (KUR) must touch more people; the amount should be bigger; and it must be easier to get the Credit. Insurance for this program must also be given and increased so we can promote inclusive financial and the people would be more bankable, the President said.

Accompanied by Vice President Jusuf Kalla, the President also emphasized that his directives must be materialized as soon as possible, i.e. to provide better access for the people to improve their skills through vocational education and training that have been executed by Ministry of Manpower collaborating with Indonesian Chamber of Commerce (Kadin).I think, when there are more ministries involved, followed by coordinating ministries, there would be thousands even millions of people who get access to improve their skills, the President said.

Regarding Smart IndonesiaCard (KIP) and Healthy Indonesia Card (KIS), the President wants the coverage of these programs to be expanded. Last night, I called Minister of Education and Culture and asked to give KIP to all orphans in Indonesia. Hopefully, it can be started soon, the President further said.