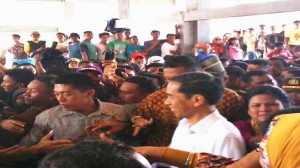 Taking advantage of his visit to Gorontalo, President Joko Widodo (Jokowi) took time to go on blusukan to the location of Gorontalo fish market on Saturday morning (6/12).

The President who was accompanied by First Lady Iriana Widodo arrived at 08:15 WITA or 07:15 WIB and saw the process of fish trade at Fish Landing Base (PPI) at Gorontalo Tent. Hundreds of people had crowded the sidewalk.

People lined up neatly and did not stop shouting Pak Jokowi! Pak Jokowi! as the presidential entourage cars passed. They shouted along the way since Jokowi came out of hotel. Jokowi did not hesitate to approach the people and shake their hands.

The Head of State also dialogued with fishermen, fish traders, and the people. After visiting PPI Tent, the President and entourage headed to the location of Gorontalo Outer Ring Road (GORR) construction.

When Gorontalo Rusli Habibie said the amount of Rp 500 billion for GORR construction, President Jokowi replied it with ease, Rp 500 billion is a small amount.

According to Jokowi, Rp 500 billion was not a big amount since the government had diverted fuel subsidy. With fuel subsidy diversion, Jokowi claimed that the government could save billions of Rupiah. We want our budget right on target, I have said this in the opening of National Working Meeting (Silaknas) of the Association of Indonesian Muslim Intellectuals (ICMI), Jokowi said.

He added that the fund diversion of fuel subsidy should be used for constructing productive things, not consumptive ones.

If we do not diver the fund, we burn Rp 1,400 billion every day. Should it be used for constructing railway all over Indonesia, it will only take Rp 350 billion, Jokowi further said.

After visiting GORR Project, President Jokowi and his entourage continued the monitoring to Lake Limboto located in Gorontalo District.

The President thought that Lake Limboto needed to be dredged so its sediment would not increase. Moreover hyacinths grew there which was feared it would make Gorontalo hit by flood.

As we arrive in Jakarta, we will soon calculate the exact budget for Lake Limbotos dredge which should be worked on immediately, the President said.

Accompanied by Minister of Trade Rahmat Gobel, Governor of Gorontalo Rusli Habibie and its Regent David Bobihoe Akib, the President took around 20 minutes monitoring the condition of Lake Limboto

President Jokowi was greeted enthusiastically by the people in Dehuwalolo who intended to directly meet the President and First Lady.

They then continued the visit to monitor the construction and development of Djalaluddin Airport Gorontalo before heading to Palembang South Sumatera.