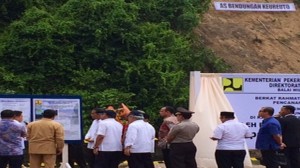 President Jokowi attention to the exposure of the Keureuto Dam, in North Aceh, Monday (9/3) afternoon

Keureto Kreung Dam is the largest dam to be built by the government in the five years. The budget amounting to Rp 1.7 trillion disbursed to Aceh, to be completed within four years.

President hopes, this Keureto Kreung Dam construction could be completed on time, so they can irrigate many rice fields.

“Very spacious, approximately 9500 acres of rice fields, which will always be irrigated, and also could control the flooding in Lhoksukon and surrounding areas, and could also provide additional electricity, approximately 6 MW, also could provide enough raw water at 500 liters / second, “President Jokowi said in his speech.

President Jokowi gave the message that the dam is made with a variety of functions, when it was completed should be treated. Unlike in other areas, where the existence of the reservoirs are not utilized in accordance with the maximum capacities, only used ranges from 30-40 percent, because it seems to have a lot of felled and deforested.

On that occasion, President Jokowi, also mentioned on the Lhokseumawe Airport. According to the President, he had called the Minister of Transportation Ignatius Jonan, in order to add of the runway so that the large aircraft can enter the airport. “The runway will be added and more extended,” he said.

According to President, some airports runways are also added, ie in Sabang, then in Cut Nyak Dien, and another in Southeast Aceh. “So, its obvious that the central government is pleased to build in Aceh. Hopefully there will be some ways that also will be built in all the provinces of Aceh and aplenty. We’ve already got the list in one sheet,” Jokowi said.