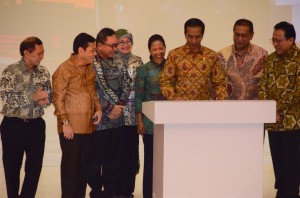 IPC Corporate University established in 2013 with the main purpose of becoming a Center of Excellence, a beacon of knowledge in the field of port, maritime, and logistics. Training institutes are located on the slopes of Mount Salak is part of the transformation program to improve human resources highly competitive with the technical competence of port and logistics, management, and leadership.

President Director of IPC, R.J. Lino in a press release said, when the government increasingly viable to promote the construction of ports in various cities in Indonesia, so, the port hard infrastructure development in Indonesia should be coupled with the development of soft infrastructure, in this case the human resources (HR) that highly competent and professional.

“Through IPC Corporate University, this is the form of our support to the government which has a special interest in the field of maritime,” Lino said.

Meanwhile, President Jokowi in his speech expressed, “We need to increase the number of the fleet of our national waters, we need to build a south sea shipping in our islands, and in the development of the maritime sector, we need knowledge management in the field of maritime,” said President Jokowi.

As a maritime nation, the president said, we also have to be a pioneer in the leadership and development of knowledge in the maritime field.

The president said, Indonesia should be able to create leadership that has high competitiveness in the business world of maritime and port that more competitive. “We must also be able to be the best center of excellence in the maritime field,” he concluded.

Attending the inauguration ceremony of IPC Corporate University, among others, Speaker of the House of Representatives Novanto, Chairman of the MPR Zulkifli Hasan, Chairman of DPD-RI Irman Gusman, Coordinating Minister for Economy Sofyan Djalil, Minister for SOEs Rini Soemarno, and 400 invitations from Port Company I, III, and IV, Stevedoring Company, Shipping Lines and associations related to port services.  (Humas Setkab/ES)