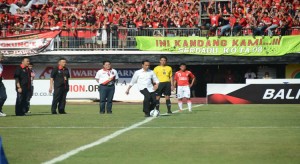 President Jokowi kicking the ball mark the beginning of the opening of the Presidents Cup tournament, in Gianyar, Bali, on Sunday (30/8)

The President’s Cup Football Tournament was kicked off with a match between the host team Bali United against Persija Jakarta, in a stadium with a capacity of 25 thousand people.

In his speech, the President said he was thrilled as the football tournament in Indonesia can resume.

The President affirmed that the reform and the revival of football in Indonesia require a big step. “We have to be patience a little and sacrifice. No problem with the FIFAs sanction nor the Indonesias absence in the international tournament.

According to the President, what is experienced by Indonesia is also experienced by other countries, such as Australia, Iran, Spain, Brunei Darussalam, when they make corrections in their football management.

Before the kickoff, President Joko Widodo walked to midfield to shake hands and have a group photo with both teams.

Furthermore, the President kicked off the match by kicking a ball in the direction of the football team who lost the draw, and this at the same time marked the opening match of the 2015 Presidents Cup football tournament.

After the first round was over, the President went to the field to hand over balls to the 70 representatives of the underprivileged Football School (SSB) within the framework of a One-Million-Balls Movement. Seventy is a number chosen to commemorate the 70th Anniversary of Indonesias Independence.

This tournament is time for unity, peace, and revival of Indonesian football.