Inaugurating the Center of PTSP, President Jokowi Appreciate 22 K/L Which Submit the Licensing Affairs to BKPM 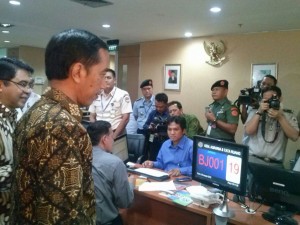 President Joko Widodo (Jokowi) attended and opened the Center of One Stop Integrated Service (PTSP), in the office of the Investment Coordinating Board (BKPM), Monday (26/1) morning.

PTSP was formed on the instructions of President Jokowi, in order to seek out the licenses; the investors do not need to back and forth to the Ministries/Institutions (K/L). Nevertheless, enough just come to Center of PTSP, which is in the BKPM. President Jokowi delivers the instruction after ‘blusukan’ to the BKPM office on October 28, 2014 ago.

In his remarks, President Jokowi said, the existence of PTSP is very important to accelerate investment and stimulate economic growth. The President appreciated the K/L that has been handed over the licensing process, to BKPM, so it could make investment-licensing process becomes more concise and faster, so there is no ego-sectored of K/L.

“I thank to the 22 K/L, because all the licensing process has been brought to the BKPM to serve faster and better,” Jokowi said.

President Jokowi asserted that the economic growth target this year is 5.1 percent previously. However, the government has turned it become 5.6 to 5.8 percent, so that each year should rise. “Should rise, and the key is the realization of the state budget (APBN) and the development of investment in our country,” he said.

Previously, Head of BKPM Franky Sibarani in his report conveys that the Center of PTSP is ready to serve the licensing process all the business areas. He said, with the PTSP, the investor will be facilitated from the licensing service, with no longer surround Jakarta to attend a variety of BKPM.

“Online Monitoring can also be used by the President to monitor the process of licensing services that existing, as well as the ministers can directly monitor the performance of their officials who become representative on the Center of PTSP in BKPM,” Franky said.

According to the Head of BKPM, after the inauguration of the Center of PTSP, then two things become the focus of further improvement. First, the Center of PTSP will continually perform the acceleration from time side of the licensing services, simplification from side of the licensing process, and assessment to unify of the licenses that equal weight. Second, the integration of licensing of PTSP Center with PTSP regional including the application of the same standard in service