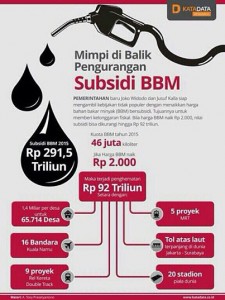 President Joko Widodo (Jokowi) firmly says that He and Vice President Jusuf Kalla have done depth analysis prior to reduce fuel subsidies. Fuel price increases by Rp.2000,- per liter for each premium and solar.

In addition, through facebook President Jokowi says the analysis talks about various increases on fuel price, from Rp.500,- to Rp.3000,- per liter. Also, talks about groups of society who really impacted from the fuel increase, such as lower margin group, fishermen, and farmers. These groups would get compensates from budgets previously allocate for fuel subsidy, he says.

Jokowi also conveys reasons of the relocation fuel subsidy. Indonesia is not a country with abundant of oil. The oil reservation is only 3.7 millions of barrel left, it sets Indonesia in 16th position in the list and with the cheapest price in the world. Even cheaper from countries with abundant of oil such as Iraq and Kazakhstan, President Jokowi wrote in his fanpage.

Based on the analysis, President and Vice President, the government sets safety net before increase the fuel price. Jokowi-JK ensure the availability and stability of food prices, speed the Kartu Sehat and Kartu Indonesia Pintar programs, he explains.

Regarding the increase of fuel price, President Jokowi confirms that the aim of this policy is to make more allowance on our fiscal. One of the goal is to give enough fund on our fiscal, he says. According to the President, there is a huge saving in 2015 about Rp.92 trillion, as the result from increasing fuel price (gasoline and solar) by Rp.2000 per liter.

President Jokowi wrote on his fanpage facebook, on Thursday (20/11), The Jokowi-JK government is ready to take unpopular policy, by increasing the subsidized fuel price. The aim is to serve more fund in our fiscal.

The amount resulted from the increasing price is equal with allowances to 65.714 villages Rp.1,4 million each; five mass transportation projects (MRT); 16 airports like one in Kuala Namu; budget needed for the development of the longest freeway in the world project which connecting Jakarta and Surabaya that would be built above the sea; nine double track railway projects; and 20 World Cup class stadiums. (ES)(Ifp)