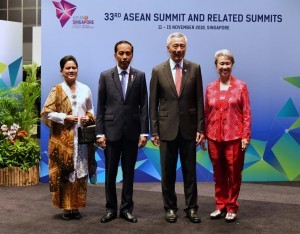 President Jokowi and First Lady Ibu Iriana Joko Widodo were welcomed by Singaporean PM and the First Lady at the 33rd ASEAN Summit in Singapore, Tuesday (13/11). Photo by: BPMI.

Indo-Pacific concept is very important for ASEAN to maintain its centrality, according to President Joko Jokowi Widodo.

“In order to maintain its centrality, there is no other way for ASEAN but to adopt the East Asia Summit as the main platform for discussing this concept,” the President said during the plenary session of the 33rd ASEAN summit in Singapore, Tuesday (13/11).

The uncertainty and the magnitude of the challenges that Indo-Pacific region should face, according to the President, will pose a threat to peace, stability and prosperity in the region in relation to the constellation of world powers.

ASEAN, being in the middle of the Indo-Pacific region, must also be able to become a hub to play its role and turn the potential threat into an increased cooperation, he said.

“Our world is full of uncertainty and we see the conflict of interest in our region. ASEAN must remain a motor for peace and prosperity, turn potential threats into cooperation, and turn the potential conflict into peace,” the President said.

President Jokowi further said that the Indo-Pacific concept can be developed by promoting cooperation and the principle of openness and respect for international law.

“In the last April Summit, I explained that it is important for ASEAN to develop cooperation in the Indo-Pacific region that prioritizes the principles of openness, inclusiveness, transparency, respecting international law, and respecting ASEAN’s centrality,” the President added.

On that occasion, President Jokowi also praised the positive response from ASEAN countries to the Indo-Pacific concept and full support from the countries for the concept. “I am happy that the draft of the joint concept has been discussed and God willing, it can be immediately agreed upon. Informal consultations have also been conducted with ASEAN partner countries,” the President said.

President Jokowi further said that the concept will provide a new direction for ASEAN for cooperation with its partner countries. Through this concept, the President expressed optimism that unity and centrality of ASEAN in the region will be maintained.

“This innovative insight will provide direction for ASEAN for its future cooperation by emphasizing the Indo-Pacific as a single geo-strategic theater, promoting cooperation  instead of competition – , advancing development, and providing prosperity for all,” the President concluded.