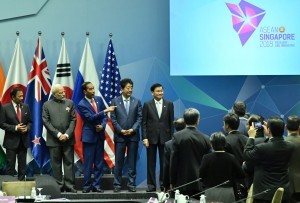 The Indo-Pacific Cooperation Concept puts emphasis on several principles, including cooperation, – instead of rivalry, inclusiveness, transparency and openness as well as respect for international law, the President said at the 13th East Asia Summit (EAS) plenary session held at the Suntec Convention Center, Singapore, Thursday (11/15).

Indonesia and other ASEAN member countries are currently developing the concept, the President added.

Indonesia has been conducting consultations with partner countries. I would like to express my appreciation for the support given by ASEAN member countries which emphasizes centrality of ASEAN, including the development of this Indo Pacific Cooperation Concept, the President said, hoping that the consultation process continues to be carried out by ASEAN with the East Asian Summit (EAS) partner countries.

With the trust given to ASEAN thus far, I am sure we will be able to cooperate and to develop the Indo-Pacific Cooperation Concept that will benefit all parties, the President added.

President Jokowi went on to say that the Indo-Pacific Cooperation Concept also focuses on three areas, namely maritime cooperation including in tackling crime in the sea, cooperation in connectivity to spur economic growth and cooperation to realize sustainable development to achieve the SDGs target in an inclusive manner.

The Indo-Pacific Cooperation does not require the establishment of a new institution, the President said, adding that the cooperation is in fact realized through solid cooperation between the EAS participating countries and it is important to boost cooperation with other partners in the Indian Ocean in the future.

In the beginning of the speech, the President mentioned what he delivered at the 2014 East Asia Summit concerning Indonesias vision as the World Maritime Axis.

He also emphasized the importance of increased maritime cooperation, not only in the Pacific Ocean, but also in the Indian Ocean.

We need to maintain peaceful and security in the Indian Ocean and the Pacific Ocean. It is not about struggling for natural resources, regional disputes, and maritime supremacy. Rather, it is about how make the two oceans a center for world trade routes, the President said, referring to the two oceans as the Single Geo-Strategic Theater.

The President went on to say that maintain peaceful and security in the Indian Ocean and Pacific Ocean is of great importance considering the challenges in the two oceans are increasingly complex.

Indonesia continues to push for cooperation on maritime issues as a form of interpretation of Indonesias maritime vision, the President said.

In 2017 Indonesia hosted the first Indian Ocean Rim Association (IORA) Summit and produced the Jakarta Declaration and Plan of Action and on 29-30 October, 2018, the country hosted the 5th Our Ocean Conference, which resulted in multi-stakeholder commitments.  Indonesia also hosted the Indonesia-Africa Maritime Dialogue, on October 29, 2018 which emphasizes cooperation on sustainable fisheries and maritime security.

On that occasion, President Jokowi also called for continued maritime cooperation to be developed within ASEAN and asserted that the discussion of such cooperation always takes time but most importantly it requires mutual trust.

The President also stressed on the importance of a low hanging fruit cooperation that can strengthen confidence building measures, for example cooperation in the development of a sustainable fisheries regime and combating marine plastic debris. (Bureau of Press, Media, &Information of Presidential Secretariat/ES).