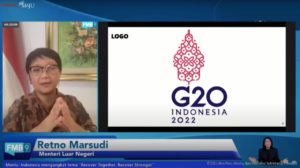 For the record, the handover of the G20 Presidency from Italy to Indonesia will take place at the G20 Summit in Rome, Italy on 30-31 October 2021.

“This is of course a matter of trust (for us). It is also a big responsibility for Indonesia at the same time and we will fulfill the responsibility as best as possible, Insya Allah,” Retno said.

In her press statement, Retno also explained the meaning of the G20 Indonesia Presidency logo that include:

“With the logo, we are committed that the Indonesian Presidency will bring a positive impact not only on all Indonesian people but also for the world,” she added.

The Minister also emphasized that the Government will work hard to make the 2022 G20 Presidency a success and provide maximum benefits for the Indonesian people and strengthen the role and leadership that Indonesia has been carrying out internationally.

“The Government hopes for support from all Indonesian people for the success of our country’s presidency,” she remarked. (RF/UN) (GWH/EP)