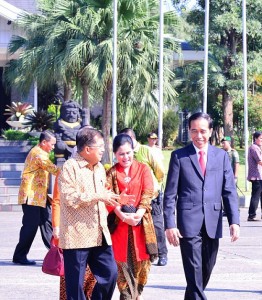 The main agenda of the working visit to the US is to attend the ASEAN-US Summit.

Therefore, the President and his entourage will head to San Fransisco, California, US to deliver a keynote speech in the US-ASEAN Business Council (US-ABC), on 17 February 2016.

In the meantime, in the press statement before leaving Jakarta, President Jokowi said that Indonesia will adopt a theme Partnership for Peace and Prosperity.

The President asserted that both ASEAN and the US have responsibilities to bring peace and stability to the region and the world.

ASEAN-US partnership must bring balanced benefits for the prosperity of the people in ASEAN and the US, the President said.

In order to bring prosperity, the President said that Indonesia will strive to improve economic partnership on small and medium enterprises sector, entrepreneurship promotion, and innovation, including the development of digital economy, while in the efforts to bring peace, the President admitted that he will share opinion with the leaders of ASEAN countries and the US regarding peace efforts in the region.

President Jokowi is also scheduled to lead a discussion session on terrorism.

I will use the opportunity to share our experience as the largest muslim population country in the world on bridging tolerance, preventing radicalism, and eradicating terrorism, the President said.

The President went on to say that Indonesia will also promote the importance of peoples participation, including in social media, in order to fight against terrorism.

I will use this opportunity to meet the CEOs of IT big companies, the President said.

President Jokowi will also use this opportunity to meet a number of Indonesian diaspora in the US.

The President and his entourage is scheduled to return to Indonesia on Friday (19/2) morning. (TKP/UN/SLN/ES)(RAS/EP/YM/Naster)