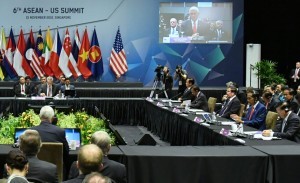 Indonesia believes two-state solution is the only realistic solution to the conflict between Israel and Palestine and to bring peace to the two regions.

The statement was once again reiterated by President Joko Jokowi Widodo in the 6th ASEAN  US Summit, at the Suntec Convention Centre, Singapore, Thursday (15/11).

There is only one way to materialize a just and perpetual peace; by implementing two-state solution, the President added.

Indonesia considered the issue of Palestine as one of the most crucial issues for peace diplomacy carried out by Indonesia. Solving Palestine  Israel issue is really important as an effort to create stability not only in the Middle East, but also for the world.

For that reason, President Jokowi urged all sides to pay more attention to Palestine and Israel peace process by considering perpetual peace and justice and based on two-state solution. (BPMI/EN)