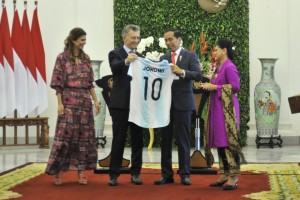 Indonesia and Argentina have agreed to strengthen bilateral ties through economic cooperation, especially in trading, agriculture, and strategic industries.

“We have met at the G20 Summit in Hangzhou, China and this time we meet again ahead of the G20 Summit in Osaka,” President Jokowi said after welcoming Argentina’s President Mauricio Macri in his first ever visit to Indonesia at Bogor Presidential Palace, West Java, Wednesday (26/6).

According to President Jokowi, Argentina is Indonesia’s second largest trading partner in South America and both countries have agreed to enhance their economic cooperation, including in trading, agriculture, and strategic industries.

“We have discussed a number of efforts to balance the trade between two countries, including the counter trade,” said the President.

This afternoon, President Macri will meet PT Dirgantara Indonesia and PT INKA executives to discuss it futher, the President said.

President Jokowi also encouraged steps to enhance cooperation between Indonesian and Argentina’s entrepreneurs, such as by inviting Argentina’s businessmen to attend the Indonesia Trade Expo.

In addition, Indonesia, President Jokowi added, also continued to push for improvement in cooperation with MERCOSUR, the largest trade block in the South American Region consisting of Argentina, Brazil, Paraguay, and Uruguay.

In the meantime, to reinforce cooperation in the fields of education, trading, and investment, the President added, an MoU on education cooperation  and a Joint Ministerial Statement on the Establishment of the Working Group on Trade and Investment have been signed.

The shirt has “JOKOWI” and “10” on its back side, while in return the President gave President Macri a soccer ball made in Majalengka, West Java as a gift. (FID/DNA/JAY/ES)