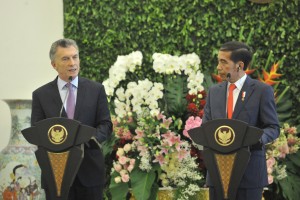 Bilateral relations between Indonesia and Argentina have great potentials that need to be improved be it in trade field or cultural fields, according to President of Argentina Mauricio Macri.

It is such an important leap for both countries and we believe that there is also enormous potential in industrial sector, President Mauricio Macri said in a joint press statement with President Joko Jokowi Widodo at Bogor Presidential Palace, West Java, Wednesday (26/6).

In agriculture sector, President Macri said that he wanted to try Indonesian tropical fruits, adding that Indonesia can also learn about agricultural technology systems from Argentina which will be mutually beneficial for both parties. President Macri also expressed his interest to cooperate on railway and aviation industries considered as great potential.

In tourism sector, the President called for improvement on visa issuance system so that more tourists from both countries can visit each other because Indonesia and Argentina are very beautiful and cultural rich countries.

On that occasion, President Macri also appreciated Indonesia for successfully organizing the 2019 General Elections and congratulated President Jokowi on his reelection,