Indonesia Assuring, US and Australian Citizens are Safe to Visit Indonesia 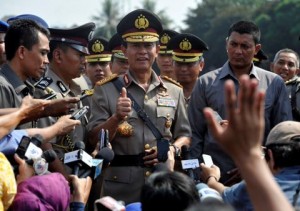 Indonesia Assuring, US and Australian Citizens are Safe to Visit Indonesia

Chief of Police of Indonesia (Kapolri) General Sutarman ensures that Indonesia is safe, so that the citizens of the United States or Australia do not have to worry to visit Indonesia.

“A few hours ago I had to give assurance that the security conditions in Surabaya, East Java, safe. Indonesia is safe, so anyone who came do not necessary to worry, says Kapolri Sutarman in the office of President, Jakarta, Wednesday (7/1).

Kapolri General Sutarman confirmed it to respond to the warning Australian Foreign Minister Julie Bishop, in order to alert its citizens when traveling to Indonesia. The State Kangaroo was admitted to receive information that terrorists may be planning attacks in Indonesia at any time, including in Bali which has been bombed twice.

Sutarman ascertain that have checked the security conditions of a number of vital objects, in particular the US-owned assets in the city of Surabaya. According him, so far no signs of potential security problems in Surabaya.

US Embassy Saturday (3/1), issued a security alert to its citizens who live in Surabaya. “The US embassy was informed that there would be a threat to hotels and banks that have linkages with the US in Surabaya, Indonesia,” the US embassy statement on its official website.

While the Minister of Foreign Affairs, Retno Marsudi, said it had asked the US embassy and the Australian Embassy regarding the resources of the terrorist threat.

According to Retno Marsudi, Security alerts both countries are not based on official information. “We are already holding the talks with the US Embassy and the Embassy of Australia regarding resources the security alerts. They do not want to tell us, “said Minister of Foreign Affairs, Retno Marsudi.

Ministry of Foreign Affairs said, the Australian travel advice is a routine activity for citizens around the world (WID/ES)