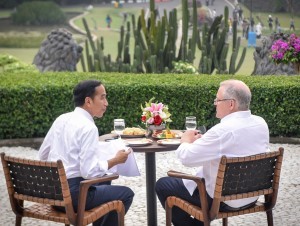 It was the first state visit the Prime Minister made since his election.

The Prime Minister was greeted with a 21-gun salute before entering the Presidential Palace and signing the guest book. The two leaders then engaged in a veranda talk at the backyard of the Palace followed by a private meeting at the office of the President. After the private meeting, President Jokowi and his Australian counterpart led the state delegations to hold a bilateral meeting during which agreements on transportation, cyber security, and creative industry were signed.

“The visit shows a strong commitment from the new Australian Government to continuously build a strong, mutually respectful and mutually beneficial relation (with Indonesia),” President Jokowi said at a joint press conference with the Prime Minister.

The President also reaffirmed Indonesia’s commitment to improve bilateral relations with Australia, adding that Australia is an important partner for Indonesia as well as for ASEAN. President Jokowi also welcomed the Comprehensive Strategic Partnership between the two countries.

During the bilateral meeting, the two leaders discussed economic openness, efforts to strengthen mutually beneficial economic relations, the importance of respecting international law and the sovereignty of each country, and cooperation in the security sector, including cyber security.

President Jokowi further stated that Indonesia and Australia have a strong commitment to enhance the cooperation in handling regional and world issues, including on eradicating terrorism, developing the Indo-Pacific concept, as well as on the Palestinian issue. The President also welcomed the signing of three Memorandum of Understandings between Indonesia and Australia on the sectors of creative economy, cyber security and transportation.

After delivering a joint press statement, the two leaders headed to the backyard of the Palace to plant a Shorea tree at the Grand Garden of the Palace.