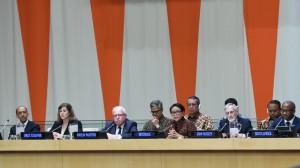 The Indonesian Government has called for an immediate cessation of the construction of illegal Israeli settlements in the occupied Palestinian territories.

The continuing expansion of illegal settlements by Israel in the occupied Palestinian territories is unacceptable, Indonesian Minister of Foreign Affairs Retno Marsudi said on Thursday (9/5).

The Minister made her statement at the United Nations Security Council (UNSC) Arria Formula meeting adopting the theme Israeli Settlements and Settlers: Core of the Occupation, Protection Crisis, and Obstruction of Peace..

According to Retno, illegal Israeli settlements have multiplied from about 110,000 in September 1993 to 620 thousand in the end of 2017 and she considered this a major obstruction to peace process between Israel and Palestine.

While the plight of the Palestinian people remains bleak, we should never lose hope and willingness to resolve the conflict through dialogue and negotiations, she added.

For the record, the Arria Formula meeting is an informal meeting that allows the UNSC member to deliver their views on international peace and security issues. As president at the UNSC for the whole month of May, Indonesia continues to pay special attentions to the Palestinie issue until the State stands side by side and on an equal footing with all nations in the world. (Ministry of Foreign Affairs PR/ES)