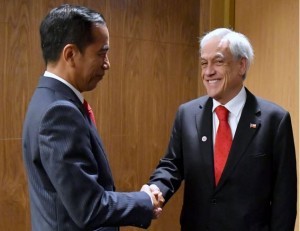 Indonesia and Chile have agreed to increase cooperation on trade and maritime affairs. In the trade sector, Chile is Indonesia’s 3rd largest trading partner in South America region.

“Last year our trade increased by 22% and reached USD278 million. This figure is still very small compared to the potential of the two countries, President Joko Jokowi Widodo said during a bilateral meeting with Chilean President Sebastian Pinera on the sidelines of the 33rd ASEAN Summit in Singapore, Wednesday (14/11).

The President further said that a Comprehensive Economic Partnership Agreement (CEPA) between Indonesia and Chile will significantly boost trade between the two countries.

Another issue discussed in the meeting was maritime cooperation on ocean-related issues, considering that both countries are equally active in the ocean-related issues, with Chili become host for the 2015 Our Ocean Conference (OOC) while Indonesia hosted the the same event in October 2018. Some of the cooperation that Indonesia and Chile can improve are fighting marine plastic debris and sustainable sea management.

For the record, the 2018 OOC in Bali resulted in 305 commitments, including financial commitments worth USD10.7 billion.

“Indonesia is committed to reducing marine plastic debris by 70% in 2025. We can cooperate (with Chile) on this matter because I know Chile has a plastic bag removal program for local businesses in 2020,” President Jokowi said.

The President also expressed hope that the MoU on Fisheries and Aquaculture signed on the sidelines of the 2018 OOC can be immediately implemented.

In the meantime, the two leaders also agreed to increase cooperation on natural disaster mitigation.

At the end of the meeting, President Jokowi said that Indonesia welcomes and supports the leadership of Chile in APEC in 2019 to improve regional economic integration through APEC and to overcome digital inequality.