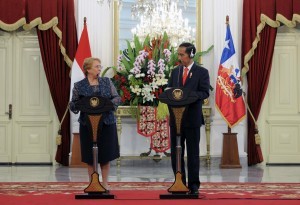 President Joko Jokowi Widodo said that Chile is the third largest trading partner for Indonesia in South America. Therefore, issue of investment trade is the main topic of discussion in the bilateral meeting between the delegations of the Government of the Republic of Indonesia and the Government of the Republic of Chile. “We hope that a Comprehensive Economic Partnership Agreement (CEPA), especially in the field of trade in goods can be materialized this year,” President Jokowi said in a press conference with President Veronica Michelle Bachelet Jeria  after the bilateral meeting at the Presidential Palace in Jakarta, Friday (12/5) afternoon.

President Jokowi believes that President Bachelet’s visit came at an opportune time as Indonesia is promoting trade and investment with non-traditional partners, including in South America, where Chile is one of the priorities.

As a form to bring businessmen closer to the two countries, the President warmly welcomes the presence of business delegates in President Bachelet’s entourage, and the signing of Memorandum of Understanding (MoU) between the two Chambers of Commerce and Industry. “We also agree that in the future bilateral cooperation will be focused on several fields, namely fishery, and strategic industry. In agriculture, especially efforts to increase trade from our agricultural products,” the President said.

In a joint press statement, President Jokowi also said that Indonesia and Chile are also members in various world forums, including the Non-Aligned Movement, the Asia-Pacific Economic Cooperation (APEC), and the Forum for East Asia-Latin America Cooperation (FEALAC).

The President believes that the bilateral relationship will be able to help improve cooperation in various forums. “I express my appreciation for Chile’s support for Indonesia’s bid for the UN Security Council in 2019-2020. Likewise, Indonesia gave the same support to Chile in 2014-2015,” said the President, adding that the signing of two new MoU cooperation will bring closer relations between Indonesia and Chile. (FID/JAY/ES) (MUR/YM/Naster).