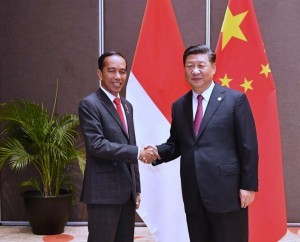 During the bilateral talk with Chinese Prime Minister Xi Jinping, President Joko Jokowi Widodo expressed hope that Indonesia and China can work together to overcome trade deficit between the two countries through various means, including providing ease for Indonesias tropical fruit exports to China and for Chinas swallow nests import from Indonesia.

The President also expressed hope for the sustainability of palm oil export and its derivative products, including cooperation in developing biodiesel such as B5, B20 biofuels, and replanting oil palm.

The Indonesian President also asked the Chinese government not to impose a quota or anti-dumping policy on Indonesias manufactured products such as steel.

In the tourism sector, the Indonesian President expressed hope for more Chinese tourists to visit Indonesia.

I also [ask] Your Excellency [Xi] to encourage Chinese tourists to visit Indonesia, particularly to Bali and 10 New Bali, he said, referring to Indonesias 10 new destination brands to support the Wonderful Indonesia campaign in an attempt to attract 15 million foreign tourists in 2017 and 20 million in 2018.

The two leaders also discussed cooperation between the two countries in investment, including to develop Industry 4.0.

The President also his appreciation for the Chinese government for the sympathy and cooperation in handling natural disasters that hit the island of Lombok and Central Sulawesi province in Indonesia.

The bilateral between the two leaders was held on the sidelines of the APEC Summit, at Stanley Hotel, Port Moresby, Saturday (11/17). (Bureau of Press, Media, &Information of Presidential Secretariat/EN)