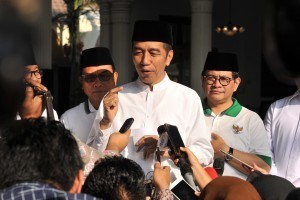 President Joko Jokowi Widodo has strongly condemned the Israeli missile attack on the Gaza Strip that caused damage to parts of the Indonesian Hospital building in Bayt Lahiya, northern part of Gaza, on Saturday (27/10).

Indonesia strongly condemns the Israeli attack on October 27 that has caused damage on Indonesian hospital and its surrounding area, the President said in East Java, Sunday (28 /10).

For the record, Indonesias political stance on the Palestinian issues has not been changed since the era of President Soekarno and President Jokowi has also repeatedly called for an independent Palestine.

The Indonesian hospital itself  which is located in the Gaza Strip 0 is funded entirely by donations from Indonesians. The hospital can accommodate 100 people in its inpatient general wards and 10 in its intensive care unit, and in its first three days of operation, i served more than 500 outpatients. (UN/RAH/JAY/ES)