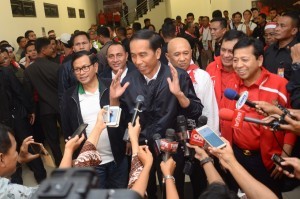 President Joko Jokowi Widodo extended his congratulation for the success of the National Team of Indonesia conquering Vietnam 2-1, at the first leg semi-final of the 2016 AFF Championship at  Pakansari Stadium, Cibinong, Bogor Regency, West Java, on Saturday (3/12) evening.

Congratulation! Indonesia vs Vietnam 2-1 at the 2016 AFF, the President tweeted in his twitter account @jokowi, that was uploaded a moment ago.

The President who came and watched the match praised Boaz Salossa as well as other players who have fought hard.

Indonesian team has fought hard. It is a good start, the President said in his tweet.

After the game, President Jokowi immediately came down to the field to personally congratulate the Indonesian players.

President Jokowi, who wore a dark color jacket, arrived at Pakansari Stadium at around 6.50 p.m. Western Indonesian Time. Watched by the President as well as thousands of spectators, the players of the two teams was entering the football fied. Afterwards, national anthems of both countries were reverberated. Prior to the game, the players paid tribute to the players of Chapecoense Club from Brazil who died in a plane crash.

The President jumped for joy while clenching his fists in the air when the first goal for Indonesia was made by Hansamu Yama Pranatas header, six minutes after the game started.

Ten minutes later, Vietnam then drew the match level 1-1 through a penalty that was superbly executed by Nguyen Van Quyet.

At the second half of the match, Indonesian team, coached by Alfred Riedl, led the game after a well-executed penalty from Boaz Solossa.