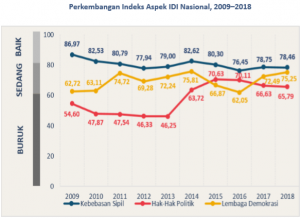 “With this figure, level of democracy in Indonesia remains in the “moderate” category,” said Head of the BPS Dr. Suhariyanto, Monday (29/7).

Level of democracy is categorized into three types, namely “good” (index> 80), “moderate” (index 60–80), and “bad” (index <60), showing that although the IDI level is still in the “moderate” category, it has experienced a significant increase compared to five years ago.

Regarding the IDI at the provincial level, Suhariyanto said that in the 2017-2018 period, the number of provinces with “good” category increased from 4 provinces to 5 provinces.

“However, there is one province that falls into the “bad” category, namely West Papua province. Meanwhile, 28 other provinces are in the “moderate” category,” Suhariyanto said.

The third and fourth positions are East Nusa Tenggara provinces and North Kalimantan provinces with IDI values of 82.32 and 81.07 respectively. The fifth position is DI Yogyakarta province with an IDI value of 80.82, dropped three positions from last year.