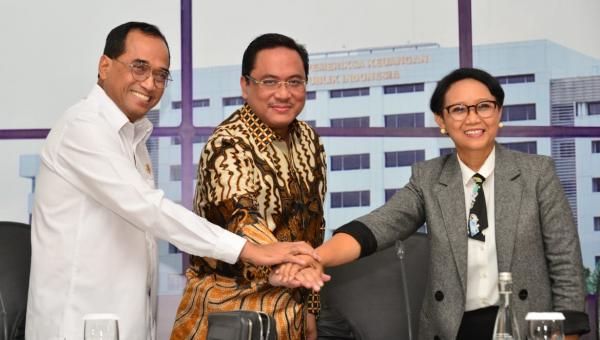 Indonesia’s re-election as a Member of the IMO Council Category C for 2020-2021 period and the Supreme Audit Board (BPK) as the IMO external auditor for 2020-2023 period is a form of Indonesia’s existence in the international world, Minister of Transportation Budi Karya Sumadi has said.

“Those are things that we are truly proud of, especially because Indonesia had to compete with other countries with almost zero possibility to win. However, the team was working hard to share experiences (in the maritime sector) and successfully gained trust and recognition in the international world,” said Budi in a joint press conference with Minister of Foreign Affairs Retno Marsudi and Head of BPK Agung Firman Sampurna, at the BPK Office, Jakarta, Saturday (30/11). !–more–>

For the record, IMO is the United Nations specialized agency with responsibility for the safety and security of shipping. Its main role is to create a regulatory framework for the shipping industry that is fair and effective, universally adopted and universally implemented.

Budi went on to say that some of the benefits that Indonesia has as the IMO member includes getting the latest information in the maritime sector that can be used to further advance the maritime industry. “In the future, we can also offer our young people to work as volunteers or permanent workers at the IMO,” said Budi.

“Those issues are unique and we have interests in such issues, apart from the safety and security issues,” explained the Minister.

“We had discussion with our team to design the winning strategy particularly on the election of the IMO External Auditor because other countries such as England and Italy are very competitive. The competition was fierce but we were able to win,” Retno said, adding that she even appointed the Ministry’s senior diplomats led by Rahmat Budiman to lobbying the team.

Meanwhile, Head of BPK Agung Firman Sampurna expressed gratitude and appreciation to Ministry of Transportation as the Head of Delegation at the IMO Session.

“In the future, BPK will conduct an examination on the IMO’s financial statements and performance. We expected to be able to collect detailed data and information to support maritime progress in Indonesia,” Agung said.

Agung further explained that after being elected as the external auditor, BPK will examine the financial statements and performance of IMO as well as two educational institutions under IMO, namely the World Maritime University (WMU) and the International Maritime Law Institute (IMLI). (Public Relations of Ministry of Transportation/Public Relations of BPK/ES)