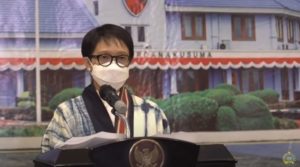 The evacuees landed safely at the Halim Perdanakusuma Airport in east Jakarta on early Saturday.

“Alhamdulillah, thank God, this morning we have evacuated Indonesian citizens from Afghanistan and they have just arrived safely in Jakarta,” the Minister said in her press statement.

The evacuees comprise of sixteen staff from the Indonesian Embassy in Kabul, ten Indonesian citizens living in Afghanistan, plus two Afghan nationals and five Filipinos.

“In this evacuation mission, five Filipinos were also evacuated according to the Philippines government’s request. This is not the first mission of bringing foreign nationals on an evacuation as it is a humanitarian obligation that must be carried out,” Retno said, adding that all the evacuation team and evacuees will self-isolate in accordance with health protocols.

The Foreign Minister explained that the plan to evacuate Indonesian citizens from Afghanistan had been carefully prepared due to the very high dynamics on the ground.

“We must take all precautions for the safety of Indonesian citizens and other evacuees and for the smooth implementation of the evacuation mission,” she said.

Retno also said her Ministry has an intensive coordination with a number of relevant ministries / agencies as well as foreign officials to prepare for this evacuation mission.

“This process is indeed not easy and requires intensive coordination. I would like to thank the governments and authorities of India, Sri Lanka, Pakistan, the United States, the NATO, Turkey, Norway and the Netherlands,” said the Foreign Minister.

Retno also thanked the evacuation team who had successfully carried out their mission. (FID/UN) (EST/EP)