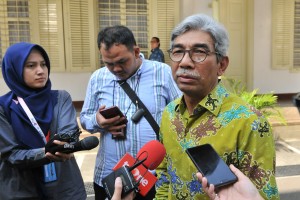 The Indonesian Government expects ASEAN countries to join hands in facing the escalating US-China trade war as it brings a huge impact on the ASEAN economy.

“We should work together so that the dispute between the two economic giants will not harm ASEAN member countries,” said Deputy Minister of Foreign Affairs A.M. Fachir to reporters after attending a limited meeting, at the Presidential Office, Jakarta, Wednesday (19/6).

Earlier in his introductory remarks, President Joko Jokowi Widodo said that Indonesia, during ASEAN Summit in Bangkok, Thailand to be held on 22-23 June, would call on ASEAN countries to unite in facing the US-China trade war so that ASEAN economies remain stable.

It is very important to unite during this crucial times (US-China trade war),” said President Jokowi.

Fachir admitted that this years ASEAN Summit will be dominated by rivalry on some issues between member countries. Therefore, he considered the Indonesian Government’s efforts to launch ASEAN Indo-Pacific Outlook as a very strategic movement.

Meanwhile, regarding conflict resolution in Myanmar, the Deputy Minister said the Government will encourage ASEAN countries to help Myanmar in preparation for repatriation. Thus, the Indonesian Government expressed hope that later the people of Myanmar will be able to agree on and adopt what has been done by ASEAN.

Moreover, regarding plastic waste, Fachir expressed optimism that ASEAN will sign an agreement on plastic waste. Indonesia, he added, is fully concern on this issue since the country is struggling with mountains of plastic waste going into landfills and polluting its rivers and oceans. (HIM / JAY / ES)