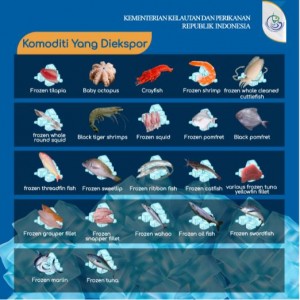 In an event dubbed as the Grand Export of Fishery Products, the Indonesian Government exported fishery products in a large volume simultaneously through the countrys five major ports, namely Tanjung Priok, in Jakarta, Tanjung Perak in Surabaya, Tanjung Emas in Semarang, Belawan in Medan and Soekarno Hatta, in Makassar.

Susi said that Indonesian has seen growth of its fisheries industry thanks to the Government measures to combat Illegal, Unreported, and Unregulated (IUU) Fishing in recent years. Since 2014, Ministry of Maritime Affairs and Fisheries has sunk 516 illegal fishing vessels, while in the first semester of 2019 alone, the Ministry captured 67 illegal fishing vessels, she said.

The Minister pointed out that the fight against IUU fishing had brought positive impacts on National Fish Stocks, adding that based on the results of a study by the National Commission on Fish Stock Assessment, Indonesia’s fisheries Maximum Sustainable Yield (MSY) shows a very significant increase, from 7.3 million tons in 2015 to 12.54 million tons in 2017, or increased by 71, 78 percent.

The increase in fish stocks, she added, was followed by an increase in the number and value of capture fisheries production.

In the meantime, the increase in capture fisheries production has brought an impact on the production of the Fish Processing Unit (UPI) under supervision of Ministry of Maritime Affairs and Fisheries and eventually led to an increase in fisheries commodity exports.

“In 2015 Indonesia’s trade balance finally became the number one in Southeast Asia and Indonesia is now listed as the worlds largest tuna exporter, Susi said.

Susi expressed hope that national ship productivity will continue to increase and fisheries-based development can be evenly distributed across the country.

She also expressed hope that welfare of the countrys traditional fishermen will continue to improve, adding that the Grand Export of Fishery Products event is also expected to encourage the spirit of local entrepreneurs to increase their production and quality of their products. (Public Relations of Ministry of Marine Affairs and Fisheries / ES)