Indonesia Eyes Trade Worth US$10 Billion with Vietnam 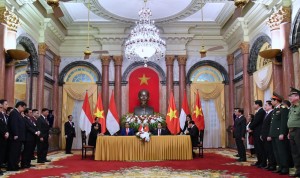 Indonesia and Vietnam are committed to intensifying bilateral cooperation in trade sector.

Both countries have lately developed a solid cooperation in the trade sector and will continue to tap and develop potentials that the two countries have.

The statement was made by President Joko Widodo in a joint press conference with his Vietnamese counterpart President Tr?n ??i Quang at Vietnam Presidential Palace, Hanoi, Tuesday (9/11).

In the past three years, the trend in trade (between Indonesia and Vietnam) has been positive, reaching US$ 6.8 billion. We hope that trade between the two countries can reach to US$10 billion in 2020. the President said.

One of the measures that both countries will take, according to President Jokowi, is to eliminate existing trade barriers including exports of Indonesias automotive products.

I have requested to President Tr?n ??i Quang to eliminate trade barrier, including Indonesias automotive products, he said.

That is why, I applaud President Tr?n ??i Quang to protect Indonesian investors and give them a good and fair treatment, the president concluded.

Furthermore, Indonesia and Vietnam will also explore potentials in other sectors and agreed to cooperate in eradicating illegal fishing in territories of the two countries.

That is why; we have signed a joint communiqué on IUU (illegal, unreported, and unregulated). This is very important, said the President.

For the record, both leaders previously held a bilateral meeting attended by several ministers from both counteries. In addition, both countries also signed 2 Memorandum of Understanding (MoU) witnessed by President Joko Widodo and President Tr?n ??i Quang.