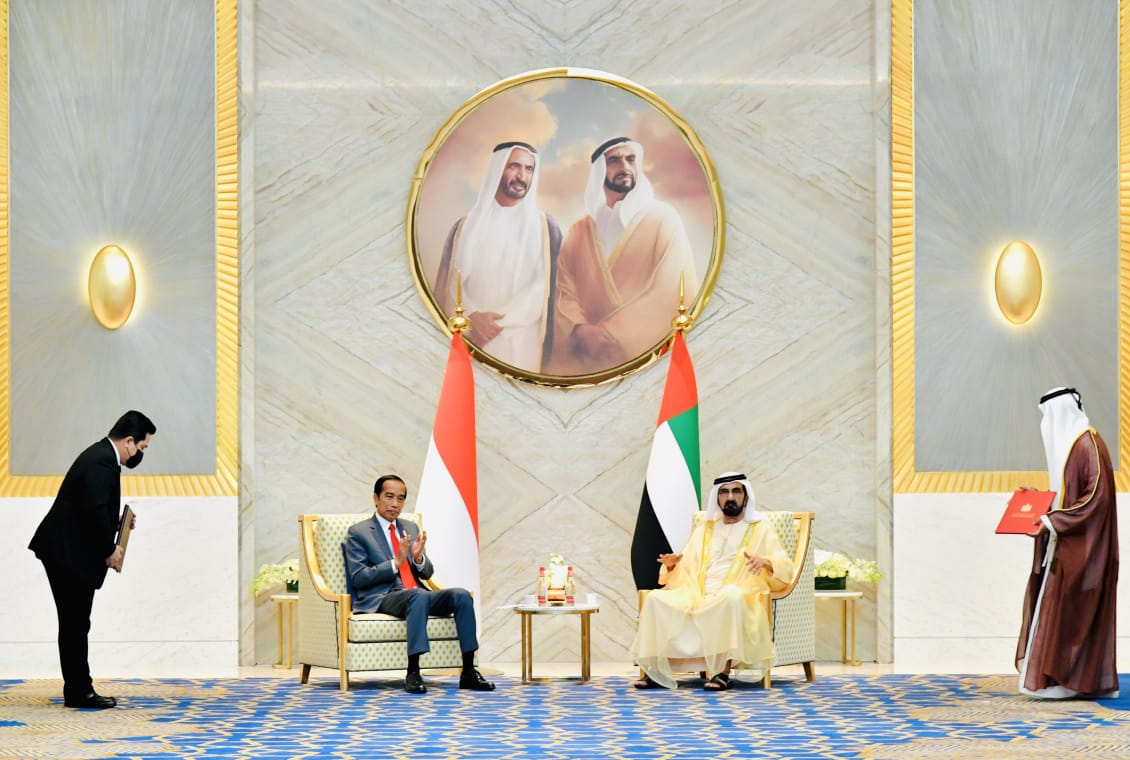 President Jokowi with Prince MBR witness the exchange of a number of MoUs at Dubai Exhibition Center, UAE, Thursday (04/11). (Photo by: BPMI/Laily Rachev)

President Joko “Jokowi” Widodo’s visit to the United Arab Emirates (UAE) has resulted in business and investment commitments worth US$32.7 billion from nineteen cooperation agreements, Minister of Foreign Affairs Retno Marsudi has said.

Retno explained that these business and investment commitments were one of the topics discussed between President Jokowi and the Crown Prince of Abu Dhabi Sheikh Mohammed Bin Zayed Al Nahyan (MBZ) at the Al-Shatie Palace, Abu Dhabi.

“The two leaders discussed the progress of investment cooperation between the two countries. For information, during this visit there were business and investment commitments worth US$32.7 billion from nineteen cooperation agreements that will be exchanged tomorrow in Dubai,” said the Minister in Abu Dhabi, Wednesday (03/11).

Retno went on to explain that the business and investment commitments include cooperation between the Indonesia Investment Authority (INA) and the Abu Dhabi Growth Fund (ADG), the INA and the DB World, floating solar panels between Abu Dhabi-based renewable energy company Masdar and Indonesia’s state-owned oil and gas company Pertamina, an oil refinery in the East Kalimantan city of Balikpapan, manufacturing and distribution of vaccines and biofuels products.

In addition, there are various agreements between Emirati artificial intelligence Group 42 (G42) Health Care and partners in Indonesia, including in the fields of smart cities, telecommunications, development of genomic laboratories, and so on.

“In total, the value of the commitments obtained during this visit reaches US$32.7 billion. In the field of investment, Minister of Investment will hold investment meetings including meetings with large American companies, which hopefully will agree on other new commitments,” she explained.

Bahlil expressed hope that the existing value of US$32.7 billion can be increased to at least above US$35 billion.

For the record, on the sidelines of the COP26 World Leaders Summit in the Scottish city of Glasgow, Indonesia also received an investment commitment of US$9.2 billion. So that in total, the investment values from the series of the President’s working visit reaches US$41.99 billion.

Apart from investment, the meeting between President Jokowi and Prince MBZ also discussed issues in the trade sector. The two leaders agreed that the Comprehensive Economic Partnership Agreement (CEPA) between the two countries could be concluded immediately.

“Negotiations have been carried out several times and the President hopes that in March 2022 the negotiations can be completed,” said Retno. (BPMI/AIT) (EST/MUR)