Indonesia Has Potentials of 70,000 Tons of Uranium: BATAN Head 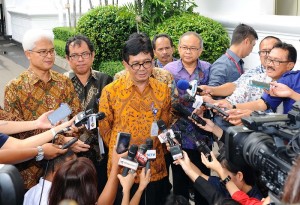 Head of the National Nuclear Energy Agency (BATAN) Prof. Dr. Djarot Sulistio Wisnubroto said that Indonesia has the potential of at least around 70,000 tons of uranium stored in a laboratory in West Kalimantan.

He also said that uranium potentials are also found in Bangka Belitung, Mamuju (West Sulawesi), and possibly in Papua.

Asked whether those potentials have been used, Djarot said:

I think we have not used them because the country does not have nuclear power plants (PLTN) yet.

So we have research reactors in Bandung, Yogyakarta and Serpong. They all use uranium from other countries, Djarot said after meeting with President Joko Jokowi Widodo at the State Palace, Jakarta on Tuesday (12/1).

According to Djarot, last study conducted by BATAN was between 2011- 2013 on uranium potentials in Bangka Belitung.

He added that so far, West Bangka and South Bangka are technically appropriate to be the locations of a nuclear power plant. Nevertheless, he said that the plan is still waiting for the decision from the Government.

Djarot also said that he had already reported to President Jokowi concerning requests from a number of regions, for example from East Kalimantan. He added that governors in Sumatera on 7 October 2015 requested for electricity supply from the power plant to be built in Bangka.

However, Djarot declined to mention whether constructing nuclear power plants is urgent or not. He asserted that it is beyond the task of BATAN because BATAN is a research institution.

We will follow the instruction given by the President earlier. The President said we must immediately make decisions after we have carefully studied all the nuclear potentials we have, Djarot said.

He also stressed the readiness of human resources that BATAN has to operate the power plants.

Asked about Indonesias readiness to build nuclear power plants, Djarot said that Indonesia had prepared for it for 40 years but as of now, no decision has been made yet.

So I say that BATAN is ready if we want to build and operate nuclear power plants or not, he added.

But once again, BATAN takes its position as the technical supporting organization. So when the President agrees to build nuclear power plant or not, we will just follow (his instructions), Djarot said.

Djarot further said that he had not received a special instruction to build PLTN. He also said that the President had instead instructed the Minister of Energy and Mineral Resources to carefully study and calculate available potentials. Based on that, (we can decide) whether we need nuclear power plants or not, Djarot said. (FID/ES) (EP/YM/Naster)