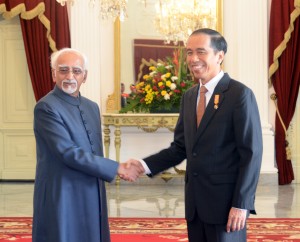 President Joko Widodo received a visit from the Vice President of India Hamid Ansari, at the Merdeka Palace, Jakarta, on Monday (2/11) afternoon

The Indian Government regards Indonesia as a big country, while Indonesia regards India as a big market; thus if relations between the two countries can be strengthened and promoted, it will bring benefits for the both countries.

The statement was delivered by President Joko Jokowi Widodo to the reporters after receiving an official visit from Indian Vice President Hamid Ansari at the Merdeka Palace, Jakarta, on Monday (2/11).

According to President Jokowi, during the meeting with his Indian counterpart, they  particularly discussed economic issues, besides other issues concerning maritime security, education and coal.

The Vice President hopes that what we discussed in the meeting would be immediately followed- up and realized,  President Jokowi said to the reporters.

Echoing a similar statement, Minister of Foreign Affairs Retno Marsudi said that the meeting highlighted issues on renewable energy, education, maritime security and other cooperation on coast guard, for example.

She also said President Jokowi had proposed cooperation on medicine industry sector because the price of medicine in India is cheaper than Indonesia.

We will discuss it with the Minister of Health and pharmaceutical companies to talk about how the cooperation will be translated into, Minister Retno said.

Retno also said that during the meeting, Hamid Ansari also invited President Jokowi to pay a working visit to India.

President Jokowi said that he would find the right time to visit (India), probably early next year, Retno said.

She also said that trade volume between Indonesia and India is quite big, which is recorded US$ 16.7 billion and  Indonesia posted a surplus from trade.

Nevertheless, according to the Minister, business contact between Indonesia and India still needs to be improved because the two governments only facilitate, while businessmen from the two countries  need to improve business to business contact on their own. (DND/JAY/ES) (RAS/EP/YM/Naster)