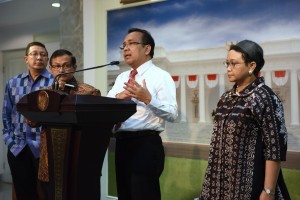 Starting a press conference after a limited meeting on Organization of Islamic Cooperation (OIC) Extraordinary Summit, Cabinet Secretary said that the 5th OIC Extraordinary Summit will be held in Jakarta on 6-7 March 2016 and will invite around 56 State Leaders/Heads of Government.

Meanwhile, Minister of Foreign Affairs Retno Marsudi said that the series of the Summit consists of Senior Officials Meeting (SOM), which will be followed up with the Meeting at Foreign Ministers Level on 6 March, then the Summit will be held on 7 March.

According to Retno, there are several reasons behind the importance of this Summit for Indonesia, OIC, and the world.

First, the condition in Al Quds has not improved yet. Second, the negotiation in quartet context that has stopped since May 2015. Third, the current global situation is very dynamic that causes issues distraction which will leave out the issue of Palestine, Minister Retno said.

It is really important in the implementation of the Summit. Indonesia becomes the host of the Summit due to the request from Palestine and OICs Secretary General. For Indonesia, it is a form of Indonesias commitment to the worlds achievement and stability, as well as interpreting the mandate of our constitution, the Minister said. This Summit, the Minister added, is expected to strengthen global support to the OIC on the solution of Palestine problem.

Minister of Foreign Affairs Retno also said that the second reason is to make a strategic breakthrough on peace process in the Middle East or in the ASEAN on the issue of Palestine. What we do is surely in line with the action of the President of the Republic of Indonesia, that is to continue to convey a message of peace in the Middle East and expressed Indonesias readiness to contribute to the peace and stability in the Middle East, Retno added.

The results of the Summit are support political statement and action oriented based from work. The Minister of Foreign Affairs also said that starting from 9 February there will be inital meetings between Indonesia, Palestine, and OICs Secretary General on the implementation of the Summit.

The Minister of State Secretary added that Indonesia wants to convey a message that Indonesia is a peaceful country that could successfully carry out the Summit.

Concluding the press conference, Cabinet Secretary said that since 6 March is on Sunday and we want to tell the world that Indonesia is a peaceful country, the car free day will be carried out as usual. (EN/FID) (RAS/MMD/YM/Naster)