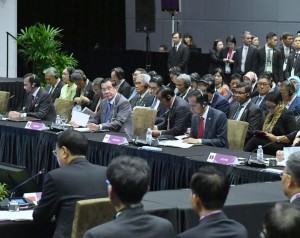 A constructive cooperation among the countries in the Indian Pacific Region is important in facing global uncertainties and challenges, President Joko Jokowi Widodo said at the ASEAN-China Summit on Wednesday (14/11) in Singapore.

On that occasion, the President invited ASEAN and the People’s Republic of China to collaborate under the Indo-Pacific concept.

“We are facing a host of security challenges in the region, not only in the Pacific Ocean but also in the Indian Ocean. ASEAN-China has no choice but to collaborate in addressing these developments. One issue that I want to underline is the importance of ASEAN and China to strengthen cooperation in the Indo-Pacific region,” President Jokowi said.

“The current Indo-Pacific cooperation developed by ASEAN will not isolate any countries. So far, ASEAN has proven capable of building regional architecture that is open, inclusive, and based on cooperation instead of competition. Over five decades, ASEAN has proven itself as a positive locomotive for change in the region,” President Jokowi said.

ASEAN considers China as a potential partner for increasing Indo-Pacific cooperation, including cooperation in the maritime sector, the President said.

“I hope China will become a partner for ASEAN in maritime sector cooperation in the Indo-Pacific region, including in overcoming maritime security in the Pacific and Indian Oceans, overcoming marine pollution, and developing search and rescue capacity in the ocean,” President Jokowi added.

“Only through collaboration can we make ASEAN-China an important pillar of peace, security, stability and prosperity in the region,” the President said.

For the record, President Jokowi on Wednesday (14/11) also met with Australian Prime Minister Scott Morrison in the ASEAN-Australia Informal Breakfast Summit. During the meeting, President Jokowi expressed hope that ASEAN-Australia relations would be better under the helm of the newly-elected Prime Minister. The President also applauded Australia for its support to the Indo-Pacific concept that highlights ASEAN’s centrality. “We conveyed our gratitude to PM Morrison for Australia’s support to the Indo-Pacific concept,” the President said.

President Jokowi also invited Australia to contribute to a fair Palestinian-Israeli peace based on the principles of two-state solutions. (BPMI Setpres/ES)