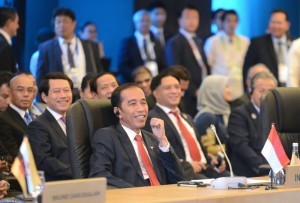 President Joko Jokowi Widodo says that all member countries of ASEAN are really concerned about the situation at the Korean Peninsula. ASEAN has expressed its firm stance towards the development at the Peninsula following North Korea nuclear tests. Therefore, President Jokowi appreciates the efforts of the President of South Korea Moon Jae-in who works hard to resolve the problem through dialogue measures.

President Jokowi also says that South Korea is one of ASEANs partners which really active in enhancing the cooperation. So, the President hopes that ASEAN-Korea Free Trade Area (AKFTA) will be more optimized and the negotiation of Regional Comprehensive Economic Partnership needs to be completed. In addition, President Jokowi emphasizes that ASEAN-South Korea must be able to maintain mutual economic openness.

The ASEAN-South Korea Summit is attended by the President of South Korea Moon Jae-in and the leaders of ASEAN member countries. (ES/SM) (MMB/YM/Naster)