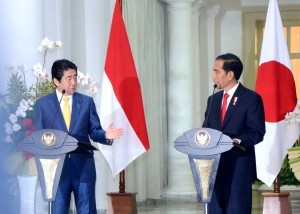 In the meeting, Indonesia and Japan have agreed to further strengthening cooperation in political, maritime, and socio-cultural fields. The enhancement will indeed always be based on mutual benefits principle, President Jokowi told the reporters in a joint press statement with Japanese Prime Minister Shinzo Abe after a bilateral meeting.

According to the President, Japan investment in Indonesia from January to September 2016 has reached US$4.498 billion or doubled than the last investment in 2015.

President Jokowi then explained four points discussed in the meeting. First is both parties will conduct the agreement on Two Plus Two (2+2) context between Foreign Affairs Minister and Defence Minister of both countries this year in Indonesia.

Third, according to the President, Indonesia also asked Japan to consider a plan to increase  air connectivity by opening Garuda Indonesia flight service to Los Angeles (USA) via Tokyo (Japan).

Fourth, Indonesia and Japan also agreed to enhance cooperation on the economy including a plan to develop Patimban Seaport in Subang, West Java, and Masela Block, to conduct initial discussion on the construction of Jakarta-Surabaya high-speed train, and to discuss cooperation on integrated marine and fisheries centers development in frontier islands of Indonesia.

On that occasion, President Jokowi added that next year Indonesia and Japan will celebrate the 60th Anniversary of Bilateral Diplomatic Relations with the theme of modern technology.