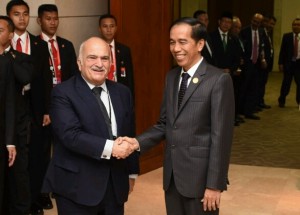 After meeting President of Palestine Mahmoud Abbas, President Joko Widodo had a bilateral meeting with Prince El Hassan Bin Talal, Prince of the Kingdom of Jordan, on the sidelines of the 5th OIC Extraordinary Summit at Jakarta Convention Center (JCC), Senayan, on Sunday (6/3) evening.

The meeting, as explained by the President to the journalists, discussed the efforts of Indonesia and Jordan to enhance the support, integrity and solidarity of Islamic countries to Palestine.

President Joko Widodo also thanked the Prince for the assistance of the Government of Jordan in facilitating Indonesian Ministry of Foreign Affairs to open an Honorary Consulate in Ramallah.

Indonesia really appreciates the support of the Government of Jordan in facilitating the plan to open an Honorary Consulate in Ramalllah, Palestine, the President said.

Regarding Indonesia-Jordan bilateral relations, the President stated that the two countries has agreed to establish a cooperation to counter terrorism, ISIS, as well as radicalism.

Indonesia and Jordan agreed to develop a center study in each country, the President concluded.

Meanwhile, the Prince of Jordan thanked Indonesia for hosting the organization of this OIC Summit. He conveyed that the Government of Jordan is confidence that Indonesia can enhance Islamic countries integrity and unity to help Palestine in achieving its independence and peace.