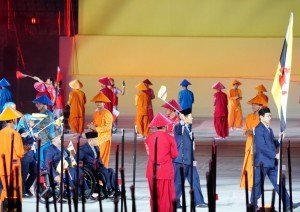 The opening ceremony adopted the theme We Are One, which reflects Indonesian diversity and was showcased with the display of the masterpiece of batik arts combined with the attraction of energetic drums performance.

As comparison, at the opening of the 2018 Asian Games, the public was surprised by an acrobatic performance of President Joko Jokowi Widodo who rode motorcycle entering the GBK arena, meanwhile at the opening of the Asian Para Games, the surprise came from Coordinating Minister for Human and Culture Development Puan Maharani as Chairperson of the Games Organizing Committee who brought Indonesia national flag along with Paskibraka (national flag hoisting team).

A dancing performance inspired by Wijaya Kusuma flower (rare flower species grown in Indonesia) was also presented, symbolizing something valuable and triumph that creates a harmonious atmosphere, followed by defile of the Asian Para Games athletes from 43 countries.

At least 840 performers performed in the opening ceremony with direction from Italian creative director Marco Balich, who also worked on similar ceremonies in the 2016 Rio Olympics in Brazil and 2014 Sochi Olympics and Paralympics in Russia.

Paralympic songs were sung when the Asian Paralympic flag was raised, followed by the reading of the oath by the athletes, officials and trainers. Afterwards a performance that conveyed the message of peace was displayed. The participants also took a minute of silence to pray for the victims of the earthquake in Lombok, Palu and Donggala.

President Jokowi and First Lady Iriana Joko Widodo attended the event together with the President of the Asian Paralympic Committee Majid Rashed and Chairman of the Indonesia National Committee Raja Sapta (INAPGOC) Oktohari.