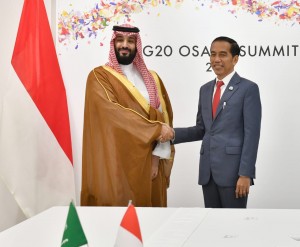 President Joko Jokowi Widodo has expressed Indonesia’s readiness to help the Kingdom of Saudi Arabias government to achieve the goal of diversifying the kingdoms economy through its Saudi Vision 2030.

President Jokowi made the statement during a bilateral talk with the kingdoms crown prince, Mohammed bin Salman bin Abdulaziz Al Saud held on the sidelines of the Group of 20 Summit in Osaka, Japan, on Saturday.

The Indonesian President also told the prince that Indonesias state-owned construction firms, Wijaya Karya and Waskita Karya, had already sent representatives to Saudi Arabia and could participate in some of the projects. I said that Indonesian state-owned construction enterprises are ready to support development in the housing sector or for the NEOM project, President Jokowi said.

For the record, the NEOM project is the kingdoms plan to build a cross-border city near the Red Sea as part of Vision 2030. The first phase of the project is scheduled for completion by 2025. The Saudi Arabian government announced NEOM in October 2017.

President Jokowi also expressed Indonesias interest in being involved in projects in other sectors, including railways and petrochemicals.

During the bilateral talk, the two leaders leaders discussed a plan to form a high-level consultative council as proposed by Saudi Arabia. (EN/GUN/ES)