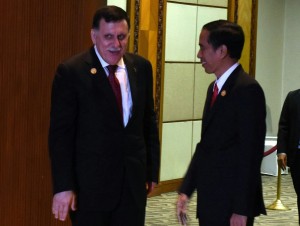 Indonesia and Libya agreed to enhance partnership on several sectors, such as energy, construction, and democracy. It was delivered by President Joko Jokowi Widodo after having a bilateral meeting with Libyan Prime Minister, His Excellency Faiz Al-Siraj during the 5th Extraordinary Organisation of Islamic Cooperation (OIC) Summit at JCC, Senayan, on Monday (7/3).

On energy sector, a number of Indonesian State-Owned Enterprises and private enterprises have already operated in Libya and it will be carried on once the situation in Libya is conducive, President Jokowi said to the media.

President Jokowi added that the same situation also applies on construction sector. Indonesian State-Owned Enterprises are ready to work on construction and housing sectors in Libya, and this country has opened up to cooperate with Indonesia. In the meeting, the Prime Minister also stated that Libya wants to learn from Indonesias experiences in democracy. I have already talked about the Presidential Elections, Regional Elections at Governor, Deputy Governor, Regent, and Mayor levels. These are several points which had been asked by the Prime Minister, the President said.

After officially opened the Extraordinary OIC Summit, President Jokowi conducted bilateral meetings with several countries, such as Libya, Pakistan, Sudan, Oman, and others. The President also took his time to congratulate Libyan Prime Minister for the establishment of Libyan new joint government. (DND/FID/UN)(RAS/MMB/YM/Naster)