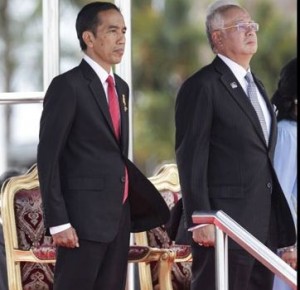 The Government of the Republic of Indonesia and the Government of Malaysia agreed to establish Special Envoy and the technical meeting in order to resolve old issues related to border and maritime.

The deal was announced by President Joko Widodo (Jokowi) in a joint press conference with Prime Minister of Malaysia Dato Sri Mohammad Najib Tun Abdul Razak after the bilateral meetingg of delegations from both countries, in Perdana Building, Putrajaya, Malaysia, Friday (6/2).

Besides the issue of the maritime boundary, according to Jokowi, in a bilateral meeting also agreed the matters relating to fishermen, whether they are overlapping areas or in the waters of Indonesia and Malaysia.

As for workers, primarily in relating to Indonesian workers, according to the President Jokowi, has agreed to use one path so it could be implemented the protection of migrant workers (TKI).

In addition, also resolved about the requests of Indonesian schools in Sabah, and also about the Bajo fishermen. “It is progressing very fast,” Jokowi said.

“Furthermore, it was agreed an appraisal for unity in ASEAN to be followed up,” Jokowi said. (EN/ES)