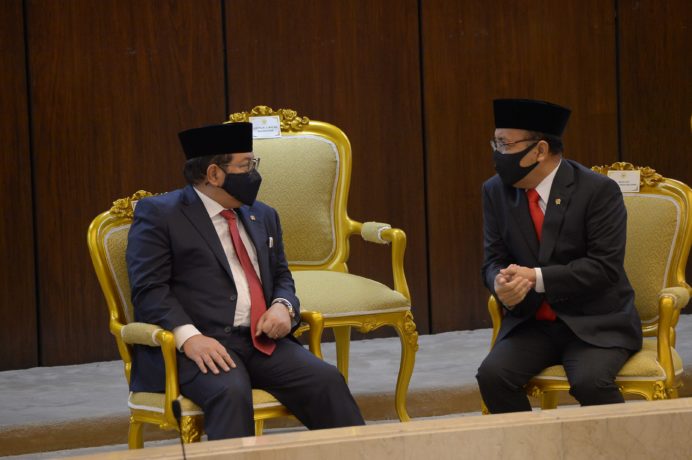 Cabinet Secretary and Minister of State Secretary accompany the President during State of the Nation Address in Jakarta, Friday (14/8). Photo by: the House of Representatives (DPR)

Indonesia has 25 years left to usher in the centenary of the independence, achieve great progress, and build the country that the people aspire to be, President Joko “Jokowi” Widodo has said.

The President also said that the nation must resolve fundamental problems that it is facing, and make a big leap for a significant progress. “We must make the most of this crisis. We must simultaneously and concurrently capitalize on this momentum. We must make Indonesia to be on par with other countries. We must make our country become an Advanced Indonesia that we aspire to be,“ the President said.

In the meantime, the President said that amid various technical difficulties during pandemic, the Audit Board of the Republic of Indonesia (BPK) is still able to audit and submit 1,180 audit reports (LHP) of 2019 quickly and thoroughly, provide 36,000 recommendations to the Government, and instruct deposit to the state treasury for Rp1.39 trillion.

Those hard internal duties, the President added, did not affect the BPK’s agenda to maintain its role as an external auditor for the International Organizations and as a member of the Independent Audit Advisory Committee under the United Nations.

“Likewise, the Supreme Court (MA) still guarantees the quick trials service during the pandemic, providing virtual trials service through e-court and e-litigasi applications that have accelerated trials other than public and face-to-face trials,” the President stated.

The President also said that in a bid to expand access for justice seekers, the Supreme Court continues to improve post service of legal assistance and modernizes case management through electronic court service. It brings success for the Supreme Court in reducing the number of unsolved cases significantly.

The President went on to say that from the period of 2019 to June 2020, the Judicial Commission handled 1,584 public reports, of which 225 sanctions were recommended to impose.

The President further said that the expansions of cooperation at home and abroad continue to be enhanced. The Constitutional Court also actively initiates and coordinates various activities at the regional and global levels, so that Indonesia’s legal system can be used as a reference for democracies around the globe. (TGH/MAY/EN)