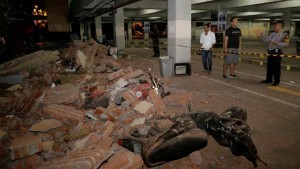 Minister of Public Works and Public Housing Basuki Hadimuljono asserted that as a country located in the Pacific ring of fire, Indonesia is like a supermall of disasters.

Considering the disasters have caused huge casualties and economic losses, the Government of Indonesia not only focuses to learn about the causes of disasters but also needs to re-think of the most appropriate policy so that Indonesia is more secure and resilient to disasters.

Disasters that hit West Nusa Tenggara and Central Sulawesi have taught us that infrastructure planning and peoples preparedness in anticipating disasters potentials must be evaluated and improved throughout Indonesia, Basuki said in his remarks at the 12th High Level Experts and Leaders Panel (HELP) on Water and Disasters Meeting in Tokyo, Japan, Tuesday (27/11).

HELP is the UN Secretary Generals Advisory Board on water and Sanitation (UNSGAB). HELP meeting which was held on 27  28 November 2018 is participated by decision-making ministers, experts and practitioners of various countries, including Japan, the Netherlands, South Korea, Timor Leste, and Australia.

HELP serves as a forum to share experiences and knowledge on disaster management, including earthquake, tsunami, and liquefaction that hit Central Sulawesi Province last September. Members of HELP are interested in that fatalistic phenomenon and willing to conduct further research about it.

The event was attended by Chair of   HELP Han Seung-soo who is also the former Prime Minister of the Republic of Korea, Minister of Water and Energy of Gabon Patrick Eyogo Edzang, Vice Minister for Engineering Affairs of Ministry of Land, Infrastructure, Transport, and Tourism of Japan Michio Kikuchi, and former President of Timor Leste Ramos Horta. In that event, Minister of Public Works and Public Housing Basuki Hadimuljono and Minister of Infrastructure and Water Management, Kingdom of the Netherlands Cora van Nieuwenhuizen were appointed as Vice Chair of HELP until 2020.

In addition to mitigation, Minister Basuki also considered post-disaster management, both at emergency response stage followed by rehabilitation and reconstruction stage must be conducted based on build back better principle, starting from planning, namely spatial planning to its detail including zoning and building code regulations for disaster-prone areas.

Ministry of Public Works and Public Housing will establish Commission for Building Safety in whose tasks are, among others, to assist Regional Government to implement spatial planning and zoning regulation consistently, Basuki said.

The next step is really important, namely to boost investment and budget in order to minimize disaster risk as in accordance with international agreement, such as Sendai Framework for Disaster Risk Reduction.

Budget allocated for disaster mitigation should not be considered as cost, but investment for a better future as the disasters risk continues to reduce.  We do not want to see cities which are developed by using a large sum of money and effort are destroyed by disasters, Basuki firmly said.

The Government of Indonesia, the Minister added, prepares several measures to adopt disaster risk financing instrument, namely disaster insurance. Therefore, legal basis and administration provisions need to be prepared first so it can be implemented in Indonesia.

On that ocassion, the Minister called on stronger international cooperation in building up the countrys resilence of the disasters related to water and climate change.

I believe strong partnership and coperation among related countries and institutions can make us generate recommendation on strategic action that can be implemented effectively so that disasters risk can be reduced significantly, Basuki concluded. (BKP Kementerian PUPR/ES)