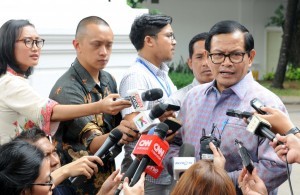 Indonesia respects the choice of the people of the United States in which the Republican presidential nominee Donald Trump won a presidential election held on Tuesday (8/11) local time or Wednesday (9/11) Indonesian time.

The point is that we must respect the choice of the people of a democratic state like the US, Cabinet Secretary Pramono Anung told the reporters on Wednesday (9/11) at the Presidential Office, Jakarta.

The votes showed that Trump have exceeded 270 electoral votes in order to win the presidential election.

Pramono asserted that in terms of political and business trade relations, Indonesia is very attractive for the USs market and also has a quite long history with the US in the field of political, trading, business, and socio-cultural relations; therefore, Pramono believes that the victory of Donald Trump in the election will not effect anything.

Responding to reporters questions on Trumps victory, Pramono explained that in international relations, there is always an adjustment before and after the election; therefore, the Government is not worried about it. (SM/JAY/ES)(RAS/EP/YM/Naster)