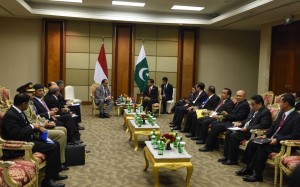 The atmosphere of a bilateral meeting between Indonesia and Pakistan (7/3), at the Kakatua Roon, JHCC.

During the meeting, both leaders agreed to promote peace, tolerance, and moderation in the world.

I have met with His Excellency the President of Pakistan, Mamnoon Hussain. We agreed that Islamic countries have greater roles to bring the peace to the Palestine and the Middle East, President Jokowi said to the reporters after the meeting.

On the occasion, President Mamnoon Hussain also invited President Jokowi to visit Pakistan to discuss the enhancement of cooperation on the trade sector between the two countries.

We also agreed to enhance cooperation on the economic sector, the President said.

President Jokowi said that Pakistan is a big market with a population of 200 million people.

According to the President, altough trade between Pakistan and Indonesia has exceeded US$ 2 million, the amount is still below potential, that means there are still many untapped opportunities.

Both countries also agreed to cooperate on defense and security sectors.

For the record, Indonesia and Pakistan have previously cooperated on the frameworks of Bali Process to find the solution to irregular migrants.