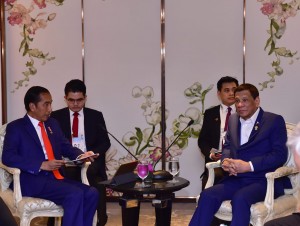 President Jokowi holds a bilateral meeting with the President of the Philippines Rodrigo Duterte on the sidelines of the 34th ASEAN Summit, Bangkok, Thailand, Saturday (22/6). (Photo by: BPMI Setpres)

On the sidelines of the 34th ASEAN Summit in Bangkok, Thailand, Saturday (22/6) President Joko “Jokowi” Widodo and President of the Philippines Rodrigo Duterte agreed to ratify the agreement on the establishment of Exclusive Economic Zone (EEZ) in August.

Speaking to reporters after the meeting, Indonesian Minister of Foreign Affairs Retno Marsudi said that the negotiation has been completed, adding that both Indonesia and the Philippines have ratified the agreement.

“So, our EEZ maritime boundary problem with the Philippines has been resolved,” Retno stated.

The Philippiness agreement to ratify the EEZ, Retno added, was a monumental event because it was agreed upon by two worlds major archipelagic countries.

The Minister went on to say that both leaders have also expressed their hope that the EEZ agreement will take effect this year after the exchange of the ratification documents.

During the meeting, President Jokowi also discussed trade issues as well as expressed his appreciation for the Philippiness cooperation in an effort to free Indonesian hostages by a Philippine separatist group. DND/DID/ES)