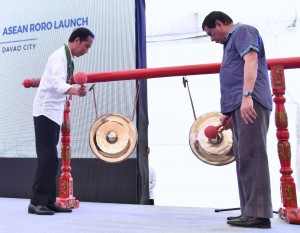 President Jokowi and President Duterte officially launch a ferry route between Davao and General Santos in Mindanao Island in the Philippines and Bitung in North Sulawesi, Indonesia, Sunday (30/4) (Photo by: Bureau Press and Media I)

President Joko Jokowi Widodo and Philippine President Rodrigo Duterte on Sunday (30/4) launched a ferry route between Davao and General Santos in Mindanao Island in the Philippines and Bitung in North Sulawesi, Indonesia.

President Jokowi said the trade between the two countries would increase with the new route, which is expected to cut shipping time of goods from 5 weeks to 2.5 days. He also said that the new ferry route is a milestone in the bilateral relations between Indonesia and the Philippines.

This is an important milestone. It will cut the amount of time for the transportation of goods between the two regions from 5 weeks to 2.5 days. This launch is happening at a favorable time. Last year, trade between our 2 countries increased by more than 30% from the year before, President Jokowi said, adding that the route is also expected to provide new business opportunities for people in the two regions.

In the meantime, commenting on this, President Duterte said: This route shall be the first of many routes to be formed for the international Ro-Ro network envisioned by our ASEAN leaders to provide more accessibility and opportunities for our countries.”

I once again thank President Widodo, the Government of Indonesia, and our private partners for helping us make this first ASEAN Roll-On, Roll-Off route possible. Let this event serve as a reminder that our relationship is not just between trade partners, but between friends that are tied together by a bond that transcends borders, President Duterte added.

For the record, goods from Mindanao Island in the Philippines such as animal feeds, fertilizer, construction materials, ice cream products, poultry, fresh fruits, and synthetics would be among those shipped to Indonesia.