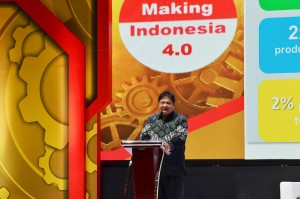 As one of investment destinations, Indonesia is able to become a manufacturing hub in ASEAN and a production base for global producers to meet domestic and export market, according to Minister of Industry Airlangga Hartarto.

“The Government is committed to boosting investment by creating a positive climate and providing ease of business licensing and industry incentives,” the Minister said in Jakarta, Wednesday (8/5).

The utilization of existing capacity, he added, is expected to rise because a greater capacity will expand exports to traditional markets and open new export markets.

For the record, in the first quarter of 2019, the manufacturing industry that came from foreign and domestic investments contributed 22.7% to the total investment, with value of Rp195.1 trillion. The Government provides fiscal incentive facilities in the form of tax holiday to boost manufacturing sector production capacity.

Airlangga went on to say that Indonesia would become a manufacturing center in Southeast Asia region, considering that several industrial sectors have a deep structure in the country, starting from upstream to downstream, where the automotive industry, textiles and clothing, food and beverages, basic metals and chemicals have been produced domestically.

“In the near future, there will be a number of automotive principals that will take part and make Indonesia an automotive manufacturing hub in Asia,” he added.

According to him, Indonesia has a significant potential for automotive industry where the number of car production reached 1.34 million units, with the value of $13.76 billion last year. To date, there are four major automotive companies that have made Indonesia a player in a global supply chain.

Data from the Central Statistics Agency (BPS) shows that manufacturing industry made a significant contribution to the gross domestic product (GDP) up to 20.07% in the first quarter of this year, higher than the contribution in the same period of last year19.86%.

“Based on the achievement, the World Bank report shows that Indonesia is ranked fifth among the G20 countries,” Airlangga said.

Airlangga further said that Indonesia is almost equal to Germany, whose manufacturing sector contribution is at 20.6%, below China (28.8%), South Korea (27%) and Japan (21%).

He added that the average contribution of the manufacturing sector to the economy in industrial countries such as Turkey, Mexico, India, Italy, Spain, the United States, Russia, Brazil, France, Canada, and the United Kingdom are around 17%.

“There would be no country in the world that could reach above 30% on the economy averages,” Airlangga said, adding that Indonesia is currently in the top 16 countries with the strongest economy in the world.

Airlangga went on to say that the Government, through the Making Indonesia 4.0 roadmap, aims to put Indonesia on the list of 10 countries that have the strongest economy in the world by 2030.

“The PwC and McKinsey studies have predicted Indonesia to be in the top-seven of the world economy in 2045. The Government aims to become the 4th largest economy in the world by the 100th anniversary of Indonesian independence,” Airlangga said. (EN / PR of Ministry of Industry / ES)